We’ve all heard of paintball. But what about airsoft? Airsoft is a relatively new shooting sport in which two or more teams compete in different game modes. Unlike paintball, with airsoft the aim is to create as realistic a situation as possible. Within the sport, there are a number of disciplines including card shooting, trail shooting, and skirmishing.

The guns used in airsoft are called replicas and are almost identical to real weapons. The gear worn by airsoft players is often similar to real military uniforms. For this reason, airsoft is also seen as a combat simulation. That’s why the police and the military use airsoft for training purposes. The main difference between airsoft weapons and real weapons is that airsoft replicas shoot 6mm balls (AKA BBs) instead of real ammunition.

A short history of airsoft

There are different stories about the origins of airsoft. According to one, the roots lie in Japan in the 1970s – where playing airsoft was a way to be allowed to own fake weapons. Owning guns was (and still is) strictly regulated in Japan, but with these models that looked exactly like original guns but fired small pellets, a craze began. The first airsoft guns quickly gained popularity within East Asia. People started using them for recreational purposes, for example for target shooting and to imitate combat scenarios. They were also sometimes used for training exercises by police and military groups.

In the 1980s, airsoft developed as a sport with the first formal rules being established and competitions organised. Airsoft gun owners participated to these games in teams, similar to in paintball games where players shoot each other to eliminate opponents. These competitions began in Japan, before spreading to other parts of East Asia. By the end of the 1980s, many enthusiasts were playing the sport in East Asia.

In the early 1990s, airsoft weapons were introduced to Europe and North America. According to some, the game was developed by the Daisy BB gun company to market a newly-created BB rifle that used plastic projectiles – safer to shoot at opponents than metal ball bearings. Today, the game has expanded worldwide. The guns are more sophisticated and accurate, and the BBs are safer. The weapons have also become particularly popular among law enforcement and military groups thanks to their realistic appearance and function. 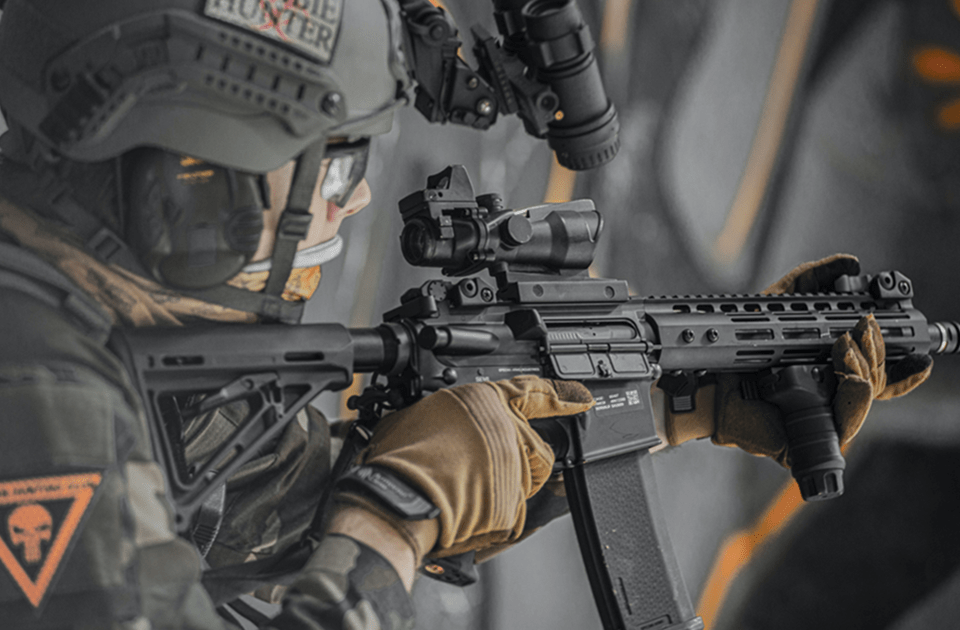 The rules of airsoft

Because there are many different airsoft games you can play, there is not just one set of rules of Airsoft. However, there are some basic conditions that apply to all airsoft games.

First, safety is highly important and goes above all. Airsoft players should all wear a minimum of high-impact-rated eye protection. The ratings vary depending on the country in which you are playing. A full-face mask is also recommended.

Before a game takes place, the weapons are tested. Any weapon found to be too powerful can not be used during the game.

Unlike in paintball, you do not actually see if someone has been hit by a ball. Honesty of the players is thus key to a fair game. That is why airsoft is often seen as an honest and friendly game in which cheating is not appreciated.

Except for these rules regarding safety and honesty, there are some other basic rules that apply to all airsoft games. One is that eliminated players are not allowed to talk. Furthermore, it is prohibited to fire blind, as this is not safe. If you are going to play airsoft, you will be briefed about these and other rules before the start of the game. 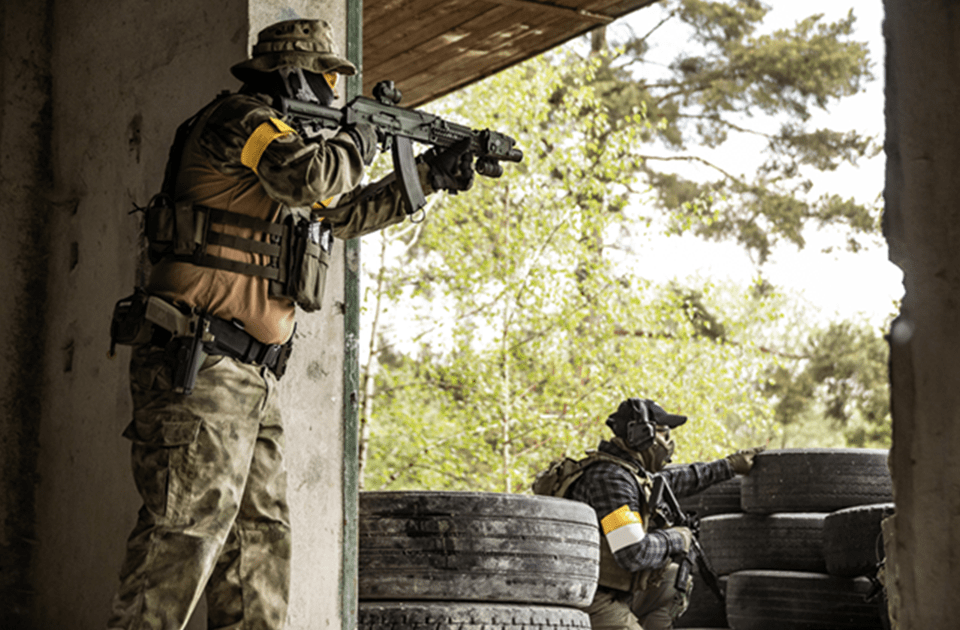 As we mentioned, there are many different types of airsoft games. Let’s look at a few of them.

During a Skirmish game, two teams of players simulate a combat situation by shooting at each other. This is the most common type of airsoft game, and it is an easy way to get to know the sport.

Milsim is similar to Skirmish, as two teams ‘fight’ against each other. However, with Milsim, the focus is simulating a military situation. Teams are well organised and have clear hierarchies and roles. Also, games usually take much longer: sometimes even several days. Moreover, creating a realistic atmosphere is even more important.

AIPSC (Airsoft International Practical Shooting Confederation) is a target shooting sport where you shoot at targets using airsoft guns and are tracked by time and/or score. Because in some countries firearms are banned, this game is an alternative for the International Pistol Shooting Championships.

Where Speedball is a paintball game, Speedsoft is the airsoft equivalent. This game is played in tournaments, and fast shooting in so-called shooting arenas is key. The military element is not so important. Although this is one of the newer airsoft games, it is quickly gaining in popularity. 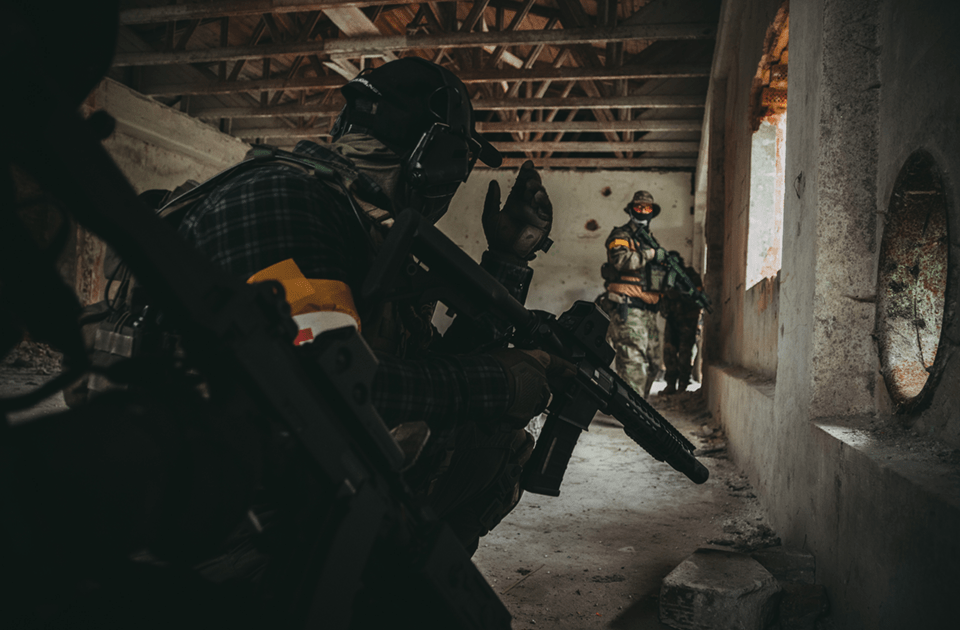 If you want to play airsoft, you’ll need a few basic pieces of equipment. First, you need an airsoft gun. There are many different styles of airsoft guns, so it’s best to try a few to find one that is comfortable for you to hold and matches your style of playing. Second, you need a supply of plastic airsoft pellets. Protective gear is also vital, as the pellets travel at high speeds and can cause damage. It is smart to wear long pants, a long-sleeved shirt, and of course full-coverage eye protection. It might also be helpful to wear a chest rig or tactical vest to hold extra pellets, magazines, and other gear that you may want to carry during the game.

There are many kinds of airsoft guns. We categorise these weapons in two ways – work mechanism and style.

Airsoft guns use a variety of shooting mechanisms, each their own benefits and drawbacks.

An alternative is a gas-powered airsoft gun. These use compressed gas to propel the BBs, usually propane or green gas. Most of the time, gas-powered airsoft guns are more powerful than spring-powered guns. Also, they can fire more quickly. This type of gun is a good choice for competitive play. However, keep in mind that they also require regular maintenance and can be affected by cold weather.

Electric airsoft guns are powered by a battery, and use motors to fire the BBs. They are more expensive, but give the best performance with high rates of fire and long range.

Alternatively, you can categorise airsoft guns by style, just like real weapons. To name a few: rifles, pistols, sniper rifles and shotguns. Rifles are the most commonly used airsoft guns. With their long barrels, they are more accurate than some other types of airsoft guns, but they’re difficult to wield at close quarters. Pistols are smaller and lighter, so carrying them and manoeuvring with them is easier. 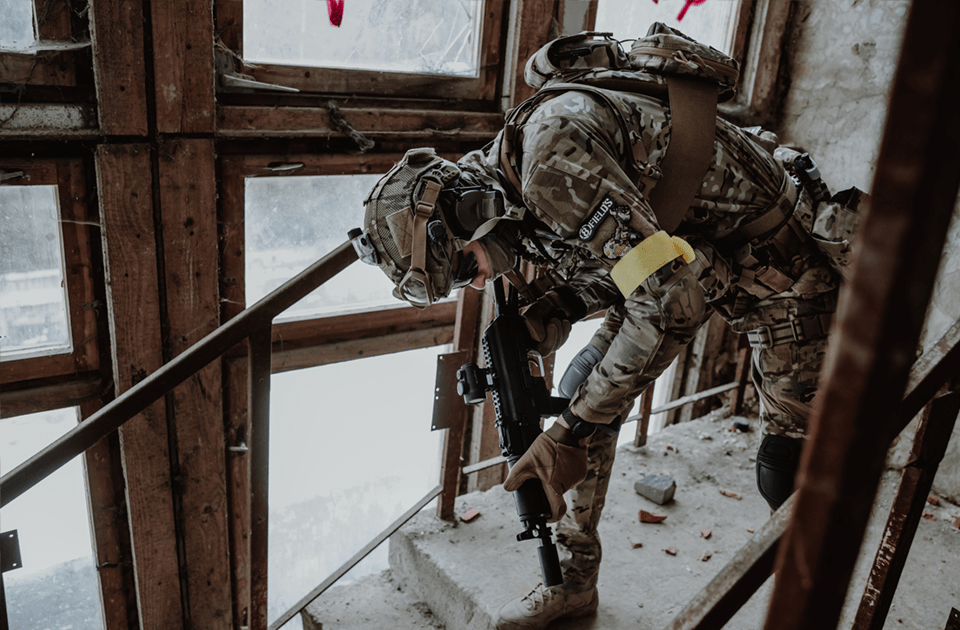 Do you want to play Airsoft? At 101 INC you can buy all the gear you need. From combat pants and tactical shirts to masks, helmets, communication equipment, slings and holsters – we’ve got it all. Use our Store Locator to find a dealer near you. Our dealers know what airsoft is all about and will help you to choose the right clothing and gear for your unique requirements.